MOONLIGHTING AS A MOM 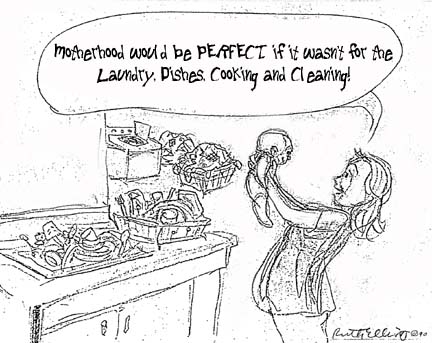 One of my kids said one day, “Mom, how come you never yell at the baby?”

Before I could answer, my oldest girl piped in,  “That’s easy. When babies are little you need to be nice to them, so when you yell at them when they’re older,  they know you still love them!”

At first I laughed, and then it made me stop and think. Had I been yelling, then?

All I ever dreamed about was being a mom, changing the world one kid at a time through love and understanding.  But after the first two kids, financial pressure forced me out to earn a living.  I eventually found a job in animation.

It was fun drawing Scooby Doo and the Smurfs. However, my new career was taking a huge chunk of time away from my relationship with the kids and my duties at home. I cried every day I had to leave them at my mother-in-law’s. I was giving my ‘all’ to someone else’s celluloid dreams, while my original aspirations of child-rearing got squeezed into a corner.

By the time I was a mother of four, just getting out the door in the morning was a big challenge. But after a full day’s work at the office, I’d come home to the other full-time job of meeting the children’s needs. Fatigue gave way to dread as the never-ending cycle of mealtimes, dishes and laundry piled up before me.

“How do OTHER mothers DO it?”, I agonized. 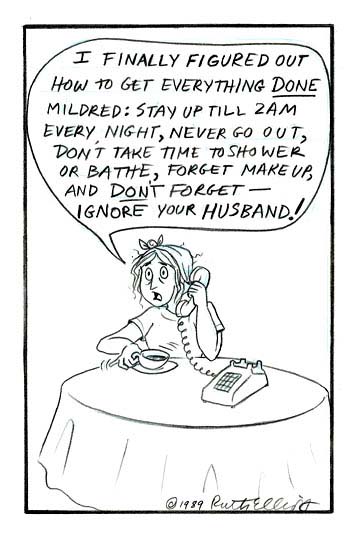 [/dropshadowbox]My mind raced down the ever looming to-do list in my head. I became a task oriented robot, numb to my feelings, and everyone else’s. But I could only hold back the pressure for so long.

One day I finally exploded at the kids and then ran into the bathroom, horrified at myself, “I USED to be such a NICE person!”

In my desperation, I knew I had to figure out a way to organize myself.

Afterwards, I apologized to the kids. “You don’t like it when mommy yells, do you?”  They all shook their heads.

“I don’t like it either. I’m sorry. I’ll do my best to stop yelling. But I’m gonna need a little help from you guys.”

GET YOUR DUCKS IN A ROW

My husband, the kids, and I had our first family meeting that night. We brainstormed, we discussed our goals, what we all wanted as a family (peace, no yelling, sharing chores, etc) and how we should be treating each other. We agreed on a set of rules for good behavior.

This became our family ‘Constitution’, which was taped to the wall for all to see. Our Constitution  not only expressed the crucial needs we had as parents, but it included important concerns the kids themselves came up with. Chores were one thing. Gripes that needed to be aired were another. “Don’t stick your tongue out at people”; “Don’t kick each other”; etc, were suggested by the kids themselves.

We continued adding to and refining our constitution with each weekly meeting. As time went by, the additions taped to the wall were becoming too numerous. We eventually boiled good behavior down to one phrase, “TREAT OTHER PEOPLE THE WAY YOU WANT TO BE TREATED”. This turns out to be a thought even young children can appreciate. 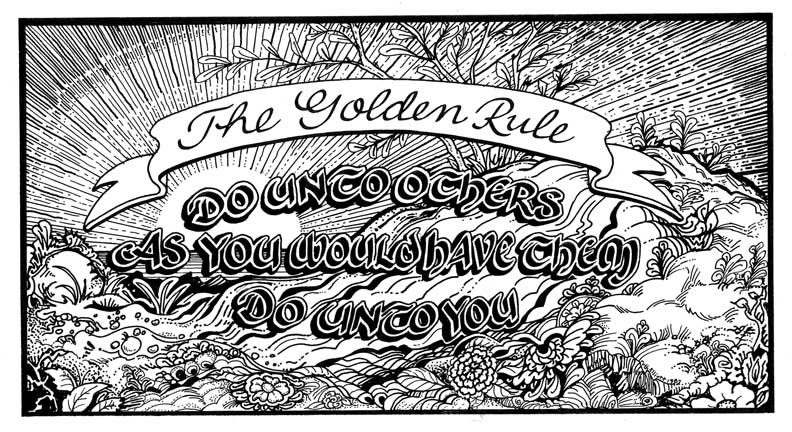 LET THE CHART BE YOUR GUIDE

When it came to chores, we wrote them all down on pieces of paper and put them in a hat. We took turns drawing them out one at a time (even me) till all the chores were handed out. If a child got a chore that was too hard for him, we exchanged it with someone else’s, until each person had a chore or two they could actually handle.

For instance: 4 year old Mike was too little to vacuum, but he was able to pick up around the house. Johnny, who was 6, could then do the vacuuming.

I created a chart for each child showing which task they had, with spaces to mark when it was completed. It too was taped to the wall. Time proved that some fine tuning was needed. We’d assess our progress at our weekly meetings, and switch or add chores as needed. And the charts would be updated.

As an incentive, at the end of the week we would all go to the 99 cent store or the Dollar Tree and they’d each get to pick out ONE thing. Any thing they wanted! No one would get ‘paid’ unless they had done their ‘jobs’. For me this method was enormously helpful. It was always necessary to be the CEO, but I was now able to stay cool, calm and collected and simply remind each kid of what they had agreed to do.

I’d say “Oh, I see you left your shoes on the floor. You want your treat this weekend, right? Go put them away so I can give you your good mark!” Then I’d smile. Reminding them was enough. (At least until they became teenagers.) 😉

The reason I invented the Good Behavior Charts on GoMommyGO® in the first place was to keep myself under control, along with the kids. It became a guideline to follow, a system that SHOWED the kids what I needed from them in a way THEY could understand and remember.  They learned what it was to feel needed and important, while I got the help I needed so I could pay attention to what I really wanted: A good relationship with the kids.

GET YOUR OWN PLAN:

After the kids grew up I put my charts on the web so every parent can use them too.

Here’s how to get the charts you can customize from 90 different images. My gift to you.

My next article will have secrets to improve your relationships.

How to do the Travis Pick CAN YOU SPOIL A BABY?